No Result
View All Result


Friends and family of a graduate of the Federal Polytechnic, Nasarawa have taken to Facebook to mourn his untimely demise following an attack by bandits.

According to reports, the deceased identified as Oliver Abba was killed on Thursday night, December 29, 2022, in his village in Niger State after traveling home for the Christmas holiday.

One of Oliver’s friends revealed that the deceased who recently concluded his National Youth Service in November 2022, was killed while trying to “follow up” on his abducted father. 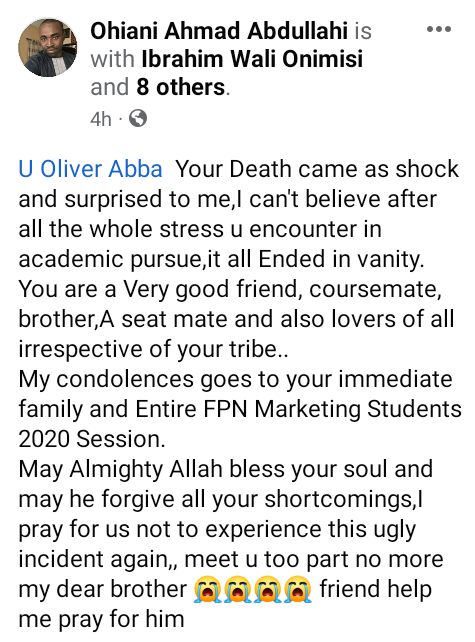 Update: Soldiers invade UNIBEN to retaliate the assault of their colleagues

Update: Soldiers invade UNIBEN to retaliate the assault of their colleagues

A group of military men allegedly invaded the University of Benin at about 12 am in retaliation for the assault of...

A year three student of the Department of Library and Information Science, University of Calabar reportedly lost her life over the...

Students of the University of Benin staged a demonstration following the death of the school's director of sports, Perez Boubouwei....

NDU dean burnt to death in a car crash

The Dean of Student Affairs at the Niger Delta University, NDU, Dr. Ayasen Kemeakigha, was burnt to death in a car...

No Result
View All Result